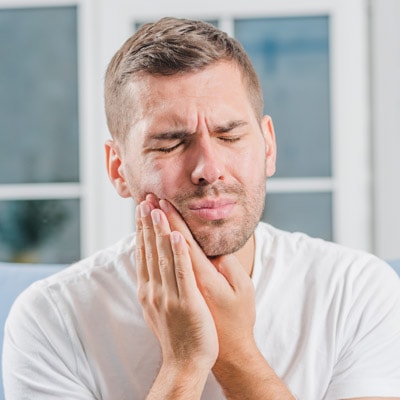 A toothache can be caused by an infection, a cavity, damage to the surface of the tooth, or by an abscess near the gum line. Dr. Sharma can evaluate your teeth to determine the exact cause of your pain and offer treatment options that will provide immediate relief. At New Hope Dentist, Dr. Sharma and her staff offer residents living in or near the Cedar Park, Texas area to schedule an appointment if they’re experiencing any type of dental pain.

What are some common causes of toothaches?

Toothaches can be caused by many different things, including:

Grinding teeth at night may also cause pain and discomfort if not brought under control.

What is an impacted tooth?

An impaction occurs when a tooth tries to grow in at an angle, pressing against other teeth in the area. Eventually, the tooth will become lodged between nearby structures and won’t be able to move any further. If the tooth is not removed, it will eventually force other teeth out of their natural position or damage them in some way.

Although any tooth can become impacted, the most common teeth that become lodged are wisdom teeth. Wisdom teeth begin to erupt after all the other teeth are in place, but by that time there may not be any room left for them at the back of the mouth.

When should a tooth be pulled?

Dr. Sharma will normally attempt to save a tooth before choosing to pull it. There are several reasons that could support her decision to conduct an extraction, however. These include teeth that have:

It’s important to leave a tooth in place for as long as possible to protect the integrity of the jaw and other teeth that surround it. Dr. Sharma will carefully weigh all the options, as well as the cause behind existing damage, before she makes the decision to extract a tooth.

For any booking click on book now button. Thank you!